I finally did it.

After nearly 10 years using the same lights I bought from Jessops (remember them?), I have finally updated my kit.

For all those years I used a very cheap, basic set called Portaflash. It was Jessops own brand of lighting gear for the startup/amateur, and at the time they were a bargain! You got for your money pairs of lights, stands, brollies and cabling to connect the lights to your camera (which had to have sync port). The lights were so basic it had three settings – full, half and quarter. Oh and the modelling on/off switch and the power switch.

And that was it.

Eventually though it was time to get a new kit. Now I am a poor man, so I couldn’t be going for the big names, and therefore I was really having to look around. However on a site I visit someone had mentioned a company called Lencarta. Never heard of them and had never seen any of their gear in a photography shop. But I went to have a look. Their price for lighting kits was slap bang right in my price range and the reason they weren’t in shops was because they don’t sell via shops – only direct. So I looked at the reviews for their lights (specifically the ones I am looking to buy). They were glowing. I mean seriously positive. Hell they were rated better than the big names.

So I bought them 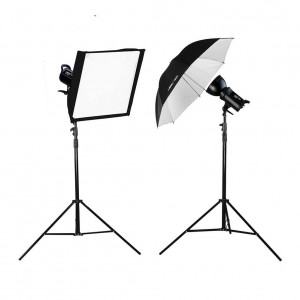 I went for the Lencarta Smartflash 2 kit, and like the old lighting kit it most came with two of everything. But it also came with was independently controlled wireless transmitter receivers, spare bulbs, spare fuses and one large brolly and one softbox.

And it blew my mind away. It made my old kit seem stupid in comparison. Firstly recycle times. At full power (and these lights were a lot more powerful) the max wait time was one second. One second. Think about that for a moment. By the time the lights have fired and the model is really just moving into the next position the lights are already charged and ready to go. Also the transmitter/receiver sets that came with the kit now enable me to independently control each of the lights; their power, the modelling bulb, or even to switch the lights off altogether. Before I had to either change which light the receiver was on, or swap the whole light over to the side I wanted it to flash. Bliss!

Another great feature is the air cushioned light stands. So now if you are adjusting the height and it slips out of your hand (poor grip or whatever – it happens to all of us!), then the stand will suddenly slow down in its descent to stop any damage being caused to your kit. Brilliant!

Another thing that was fantastic was their delivery time. Now I bought the lights over Christmas, while they were closed, so I had to wait until they were open to then even start doing anything about my order. They opened the first Monday after new year, and then 15 minutes later I got a text saying that the courier had picked up my gear. Then 20 minutes later I got a text with my delivery slot – the next day. And it was delivered, right on time.

All of that for £5. Amazon could learn a hell of a lot from this.

So Lencarta won me over with their stuff. Which now means that I want to get more gear for my new toys! If only I had the money…

You can see the kit I bought from this link: CLICK HERE