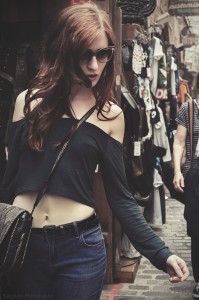 To pretty much all the models I have worked with, that sentence above will be alien to them. I don’t plan. I don’t have a notepad with ideas for poses and styles. I wing it entirely. A model will turn up, I say ‘what you got?’ and it pretty much goes from there. Why? Well whenever I have planned anything it pretty much never goes to that plan. Or something will come up that inevitably ruins doing the plan.

So when I said to Isobela recently that I want to go to London, assuming that I had no plan is an incredibly scary prospect! But I had done a little research! I had scouted previously locations and thought a little about setups for shoots. The only issue was the date – Sunday of the May bank holiday. It was going to be mentally packed in places!

But for me, the first part of the shoot relied on that! Y’see… planning! It was in Camden market and I wanted loads of people around. It wasn’t like it was nude work or lingerie, just fashion and casual stuff, but you can never know how people will react to someone suddenly kinda just standing there in an odd pose, to then see a guy with a camera a little distance away snapping her. But to the Londoners’ credit, they just ignored it for the most part and carried on!

Camden market is a fascinating place, and it’s quite easy to be in there for hours, slowly looking at the multitude of stalls and shops, and moving very slowly with the flow of people also doing the same. I advise anyone who has never been there before to at least go there once in their lives!

Anyway, after around an hour or so we decided to move onto our next location, but not before we had a cheeky Nandos! And who wouldn’t???

After that we then headed to the London Underground. 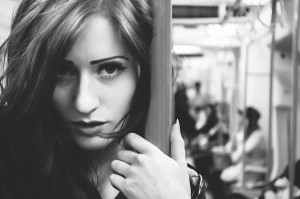 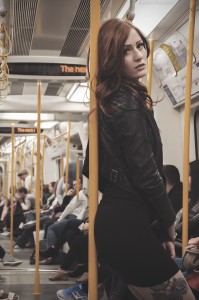 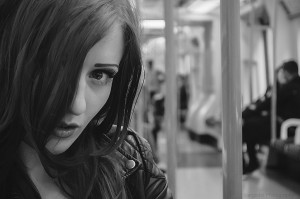 When I was last in London I had noticed that certain train routes had different trains, and the ones located on the Circle line (named because simply all day it circles around central London) had carriages that wasn’t split into individual carriages and you could right from one end to the other when the train was in a straight line. I loved that so we got on the next Circle train that arrived. Again I have to tip my hat to the other passengers who simply let us get on with it. 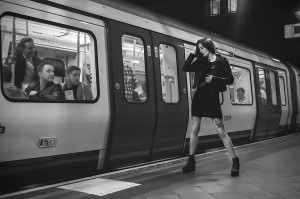 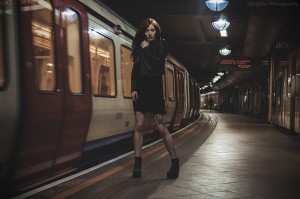 Then afterwards we got off at a station which was darker than the usual platforms and did some shots there, including a cheeky one which I almost didn’t get featuring a couple of fellas who had their day brightened up by our antics!

I think in total Isobela and I had spend the better part of an hour and a half, in the middle of the day, underground shooting there. Was surprised me a little was how relatively quiet that platform was we used, and I must remember to go back there one day to explore more styles.

After again stopping for a brief time for a drink and a change of outfit it was off to the City of London for the final couple of setups. 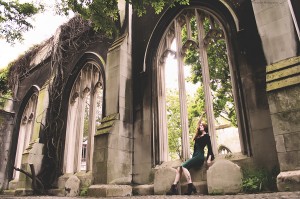 I had found online an old church that was slap bang in the middle of the city, surrounded by office buildings but looking like it should be in something like Narnia. Most bizarre. When we got there, sure enough there it was, but considerably smaller than I had imagined and also had a constant stream of tourists with cameras fluttering about. But we found a good part on the outside of the church and snapped a few pictures there. I was only a relatively quick stop there as the clock was ticking away and we wanted to get the last part of the shoot done in the city.

So finally we set up for our last part of the shoot. Isobela was dressed up in her snazzy suit and we shot a few images out and about, near the fairly new office building on Fenchurch street that simply looks like it’s going to topple over and throws your sense of balance whenever you look up at it. 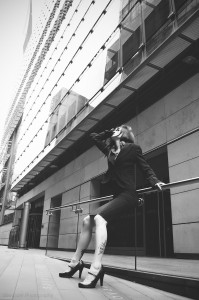 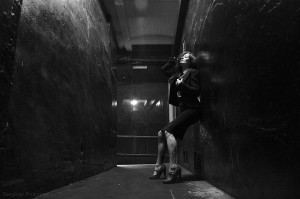 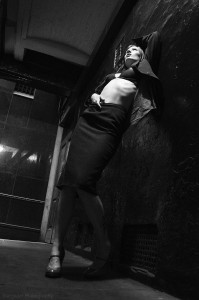 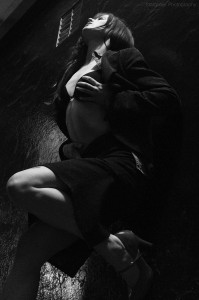 And that was pretty much it! I hope you enjoyed the photos!