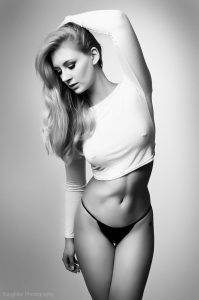 So a little while ago a new model got in touch with me. Her name is Katherine. She was new to the modelling scene and my shoot was to be her first proper shoot.She had done a little portrait work for a friend, and also did a fashion show thing for someone else where photos were being taken, but never actually a studio based full on shoot. When a model tells me that the first thought that pops into my head is “she will need a lot of directing” and “a lot of the shoot will be more practice than anything actually usable”. Because a fair amount of the time that is usually the case.

Oh holy hell was I wrong.

The plan was a lingerie level shoot, and as usual when a model arrives, we have a good natter for a bit beforehand. Bear in mind that this was a collaboration shoot so there was no real time limit for us. On a standard shoot typically a model will arrive and the shoot starts pretty much straight away. But when collaborating I like to sit down with the model and get to know her a little bit. It aids with the planning and also builds up a bit of a rapport going into the shoot. Also, in the case with Katherine, it helped to calm her nerves a little, because she was understandably a little anxious, being her first time.

She had mentioned a while ago prior to the day that she would be interested in perhaps doing some concealed nude work, but that would depend on how she was feeling and on the day she was very much in the lingerie level camp. 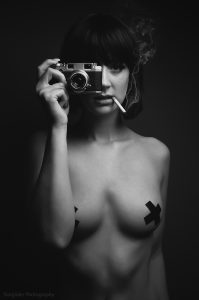 But by the time the shoot started, she changed her mind. She thought ‘fuck it, I’m doing concealed’ and the plan of action for the shoot changed. I told her “if you are doing this, in 15 minutes you won’t even notice or care than you’re naked”. And sure enough, 15 minutes later, she was totally into the shoot, and not even slightly caring that she was standing in front of my naked.

And my fears also about Katherine being inexperienced and requiring a lot of work also went in those 15 minutes. I was beginning to think I would need to call bullshit on not having modelled before. She was an utter star. Yes I did need to direct somewhat at the beginning – basic poses, head positions, working with the light, but in a short time the direction lessened and she started to exhibit a natural ability to pose, picking up quickly what worked best for her. This was going to be a fabulous shoot.

She loved some of the ideas that we were bouncing around, and the more we shot, the more excited she got seeing the back of camera images. Some models as the shoot goes on begins to wear down – it is hard work after all – but Katherine seemed to feed off of the shoot setups. It was fantastic, and eventually I had to call time on the shoot! She would’ve gone on for ages.

Rare is the time you meet a new model who shows natural talent for this industry, and she is both willing to learn, not afraid to ask questions, and quite literally puts 100% into the shoot. Before we had finished our shoot we were planning our second one (April, in case you were wondering!).

The average number of images I get from a shoot with a new model is usually around 10. So far I have got 21 edits from this shoot, and I haven’t finished yet – there are still some sets I haven’t touched yet! 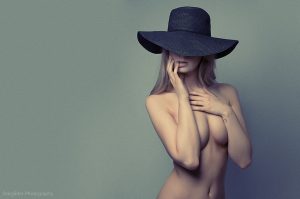 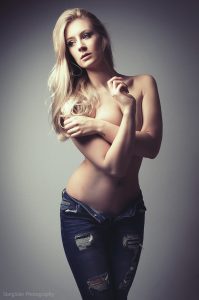 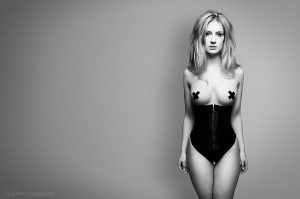 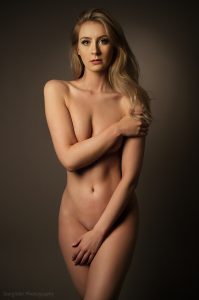 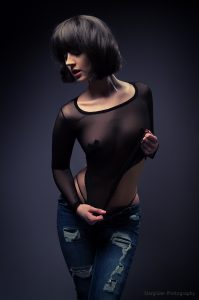